In the given dispute the complainant was incorporated as “Puma Se”.The complainant owns several businesses like manufacturing,marketing ,sports shoes,accessories,Flipflops,T-shirts,shorts,bags,wallets and other accessories and equipment with high quality.

The complainant registered the trademark PUMA in 1948 by Rudolf Dassler and has been widely used since then.The complainant PUMA products are available in more than 120 countries worldwide including India,they spent millions of dollars in advertisement and promotion of their brands through media,newspapers and magazines.

The domain name puma.com is owned by the complainant on September 19,2017.By extensive use and promotion of the puma mark the complainant has earned notable goodwill and reputation.The complainant owns several cctlds like puma.fr ,puma.de and puma.jp.The complainant approached  respondent in the month of december 2017 seek voluntary transfer of disputed domain.

Finally,the complainant approached .IN registrary on January ,2018 because of the unsatisfactory response from the respondent opposing to transfer the disputed domain to them.

The respondent has registered the domain name puma.in with .IN Registry on February 16, 2005 and also owns trademark of PUMAIN from 2006 to 2016 and stopped renewal from 2016 .PUMAIN originating from the strong smell of the product from the German saying “someone smells like a puma”,respondent has admitted its business is in European Union only.

As per the evidence established by Complainant,  the complainant owns multiple domain names comprising the trade mark PUMA which would create confusion,Anyway the use of trademark Respondent “PUMA” is not legal.Therefore the Respondent has no legitimate right over the said domain name.

Finally,the Tribunal finds the disputed domain name has been registered and used in bad faith.

Honorable Arbitrator Divya Balasundaram taken the decision as the “complainant has succeeded in its complaint”.

At very high level its sounded to me an obvious TM violation as PUMA is a big brand which is recognised by the whole world, I also felt why the hell the respondent has registered such name in first place. As I started looking into the details, its sounding the respondent views are dismissed by Honorable arbitrator, for me its sounded like a very bad decision. Why i feel so

1) Domain name Puma.in is registered by the respondent on 16th Feb 2005 , What the complainant has been doing all these 12 years? IMO, doctrine of latches is applicable in this dispute , however the arbitrator has conveniently ignored the respondent response on the same.

2) Respondent is not using PUMA domain name for any wrong doing , respondent is using for legitimate business. Having a TM alone doesnt attribute the entire internet space rights for the TM owner as TM is limited to one of the several classes possible. I am yet to understand how the bad faith is proven in this dispute? Clearly, there are no references on how the arbitrator has come to the same conclusion.

3) Respondent was owning a TM for PUMAIN for almost 10 years and the same has been expired. It is important to note why anyone register a TM and owns that for 10 years?. Again the Honorable arbitrator has conveniently ignored the respodent statement.

PUMA.IN is re-directed to the below link (Translated page from German to English). 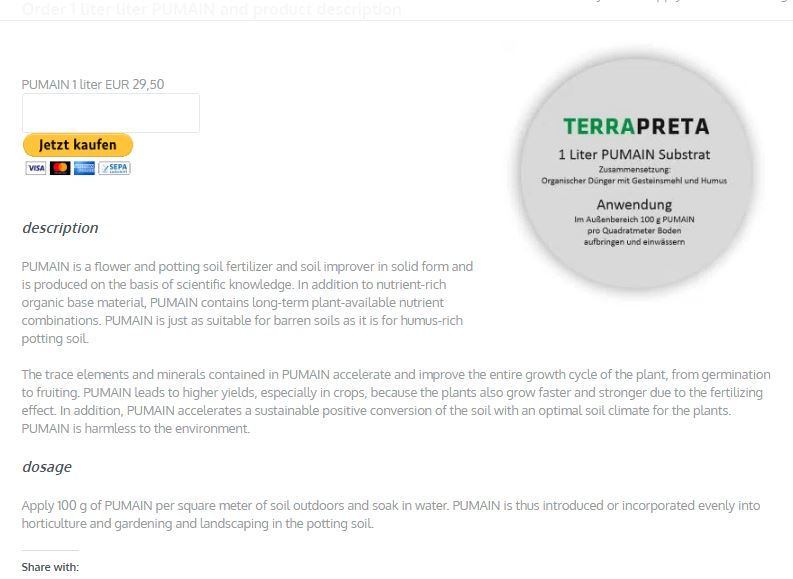 Honorable arbitrator thinks using “PUMA.in” instead of “Pumain.in” is inappropriate, this is the issue of getting some random IP lawyers without having any understanding of domain name space. Even a small time web developer can tell “Puma.in” is domain hack for Pumain. Several popular brands are using the .IN for the same purpose. I am not all convinced on how the bad faith is proven by complainant and what are the evidences submitted for the same, it’s a crap decision in all means.

Respondent should challenge this dispute in High court , Puma is a big brand there is no doubt about it and also it has acquired secondary meaning too, at the same time its a generic word too (like Apple). If the respodent is doing the business in the same TM category as complainant , certainly there is an ambiguity however its not the scenario in this dispute. Respondent is totally in different line of business and been using for 12+ long years.

IMO, These are the kind of INDRP arbitrators who are making the .IN extension down. At least, registry need to appoint the qualified arbitrators who understand the domain names disputes over some IP lawyers for namesake. Without taking strong measures like INDRP reforms, its hard to see .IN numbers growing further. Public opinion of INDRP system is “INDRP just favours the big brands and punish the normal public and small companies”. If the trust is not there in extension, it’s hard for the small and medium enterprises trusting .IN and building their brand / future on .IN. Hope in coming days, registry will bring the reforms on this front.

Please read the further details about the dispute” @puma.in