As per InternetLiveStats.com India has around 462+ million internet users and its only 34.8% of the 1.32+ billion Indian population. Clearly there is a lot of growth potential to increase the penetration rate as time passes by. The other hand Indian tech startup ecosystem is hugely boosted by the governments flagship initiatives like “Make in India” and “Startup India” and India clearly emerged as the country having world’s 3rd highest number of tech startups after United States and Britain.

Trak.in is closely tracking the Indian startups funding data on monthly basis, our.in has considered the same data to generate the domain name extension analysis to find-out the current trends of domain name usage by startups. Clearly .COM is a leader as expected , .IN closely following .COM in terms of numbers.

Kindly note, only startups raised seed funding in the month of January 2017 are considered for this domain name usage analysis. Please find out the further details below.

Number of Tech Startups by Extension: 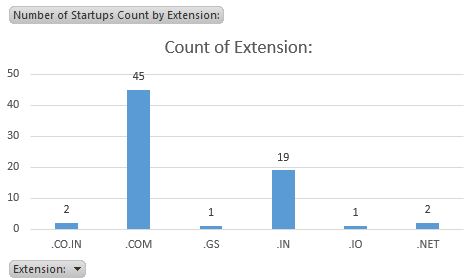 On a different note, Indian startups are certainly choosing poor quality domain names thats quite evident looking into the domain names in use, which is likely to improve as the competition grow up and it will be too difficult to survive or stand-out with a poor domain name usage.