Benchmade Knife Co. Inc. came up with a .IN domain name dispute over <benchmade.in> in February 2019. The Domain Registrant in the matter was Mr. Harjatinder Bajaj based in Delhi, he was represented by Cylaw Solutions, India. 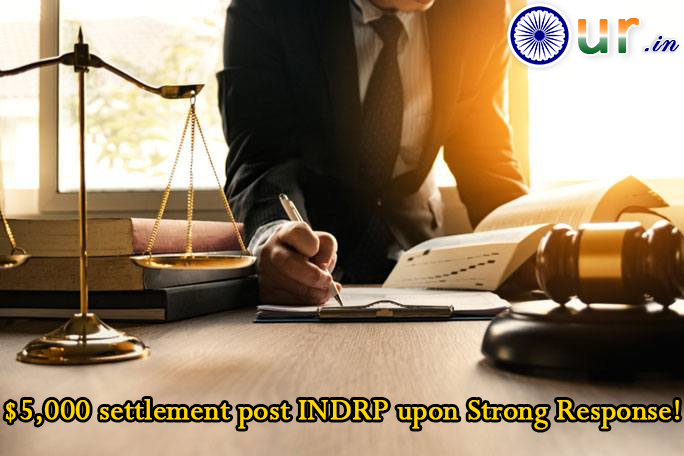 Benchmade Knife Co. Inc. is the owner of the brand “BENCHMADE”, which is well-known for the manufacture and sale of high-quality tools and knives. The use of the brand BENCHMADE can be traced back as early as 1987 when an individual by the name off Les de Asis decided to design a knife more akin to the materials and manufacturing technology of the time. While there were “handmade” and “factory-made” products, it was “BENCHMADE” that described the quality of Les’ products. It was a “bench” operation, and Les wanted the name to reflect the marriage of manufactured and custom.

Benchmade Knife Co. Inc. has made efforts to protect its brand by registration of associated Trademarks in various jurisdictions including India and the USA. In India, the Trademarks are registered to vide application no 2366486 and 2366489 dated 19 July 2012. The Complainant uses the mark “BENCHMADE” trademark as a part of their company logo to distinguish their products from their competitors. The Complainant registered the Domain Name www.BenchMade.com on 30 July 1995 and has been used as an active website since then. The said website has a listing of all the products and also allows users to make purchases online. The Complainant has a portfolio of over 50 domain names, many of which feature well know “BENCHMADE” keyword including .net, .org and so on. Complainant also provided more information as to Google search results as to their brand, social media recognition, further awards, and various activities.

The complainant alleged that the disputed domain name <benchmade.in> is currently active and redirects users to a parked page, which offers PPC links, directly competing with the Complainant’s services. The use of the domain name to host PPC links cannot justify a legitimate interest, as the Respondent gets a commercial gain, either directly or indirectly, each time an Internet user clicks on a hyperlink. Therefore, the use of the domain name is for commercial gain and thus, means that the Respondent cannot come within this defense.

Mr. Harjatinder Singh Bajaj, the Respondent, is the Chairman and Director of the company, Gitika Overseas Pvt Ltd. The main objective of Respondent’s Company initially included manufacturing of garments, etc and those were specifically amended in February/March 2016, as to the Main Objectives of the Company to include objects related to Furniture making as produced as evidence. The Respondent, highly qualified management professional and already having involved in the said business for the last many years, while 2016 was the year of Startups when the Indian Prime Minister launched the Start-Up India movement as well.

The keyword “BENCHMADE” that forms part of Disputed Domain Name is a common dictionary word to mean: “(of articles made of leather, wood, etc.) individually produced and finished, as on a carpenter’s bench; custom-made”. That is it generally refers to products made as on Carpenters Bench or otherwise also to custom-made products or individually handcrafted on a bench, which can be in the field of furniture, garments, leather goods, and so on.

The Complainant as well submits in the Complaint, the use of the word BENCHMADE in a generic sense, when it states that – While there were “handmade” and “factory-made” products, it was “BENCHMADE” that described the quality of Les’ product … This was a “bench” the operation, and Les wanted the name to reflect the marriage of manufactured and custom. That is, BENCHMADE has always been a generic term used in businesses, who deliver custom made products including furniture items.

That the mark BENCHMADE is generic, having defined at Dictionary.com and also various articles define it in comparison to machine-made. That the Complainant’s mark is comprised of generic terms that are not exclusively associated with Complainant’s services, that is, the widespread third-party use and common use of the term “BENCHMADE” is wholly unrelated to the Complainant, as there are over 100 domain names registered with the said keyword in different domain extensions.

The Respondent has already submitted “BENCHMADE” is a common word, in use by numerous businesses. It was adopted by the Respondent purely because of its generic nature and further on the date of registration of the Disputed Domain Name, it had no knowledge as to the Complainant’s mark. As long as the domain names have been registered because of their attraction as dictionary words, and not because of their value as trademarks, this is a business model that is permitted under the Policy.

It is clearly evident that the Respondent registered the Disputed Domain Name along with MyBabysRoom.com for the legitimate purpose of using it in his business and because of its generic value in the word and had no knowledge of the Complainant company or its product, while the domain was freely available to register. Further in the same month when the changes to the Memorandum were filed by the Respondent and India’s Startup India movement was in full swing, i.e. on 24 Feb 2016, Respondent registered many domain names related to furniture. And further in June 2016, the Respondent searched for more generic names related to his business and as a result, registered disputed domain name <benchmade.in> and acquired another domain name <mybabysroom.com> again at Godaddy.com, both on the same date, i.e. on 21 June 2016.

The Respondent acknowledges that the Complainant holds Trademark as provided registered in connection with Class 8 in India but denies that it is well known in India. The Complainant’s single registered trademark is, however, sufficient for this proceeding in terms of the low threshold under the first part of the three-part INDRP test. That at no time had the Respondent ever heard of the complainant or its marks.

In fact, the Complainant has provided no evidence of any reputation whatsoever, It has provided no sales volumes, customer volumes, advertising and marketing expenditures, media reports, or consumer surveys in India. Accordingly, there is absolutely no factual the basis for finding that the Complainant has any reputation to speak of, let alone outside of the USA where it happens to have somewhat remarkably obtained a trademark long back over what would appear to be a descriptive term and while there was already another business with similar Trademarks.

The decision referred that the Domain Name is to remain with the Respondent, as parties have entered into a settlement. As it was decided between the parties to terminate privately the proceedings and settle the matter post the INDRP proceedings!

This is a good example as to how a response in an INDRP proceedings, filed through an experienced lawyer can help settle the matter in a positive manner, while Domain Registrant needs to otherwise avoid offering the domain name for sale to the Complainant during the INDRP proceedings (see INDRP/1124 – SiteGround.in) and issue any kind of threat to the Arbitrator (see INDRP/1154 –  chuckecheese.in).