What could be the future brand of Reliance “New Commerce” 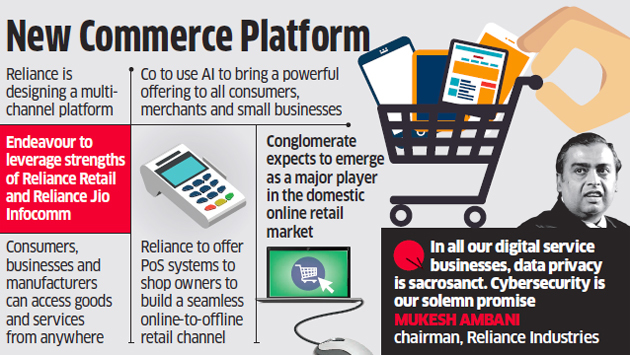 It is working to empower nearly 3 crore merchants and Kirana shop owners with its new commerce, digital as well as physical distribution.

During the RIL’s 42nd Annual General Meeting (AGM), the chairman said that it will soon unveil Reliance on new commerce retail arm.

“This user-friendly digital platform is designed for inventory management, customer relationship management, financial services, and other services,” he added.

According to him, this initiative also looks for the empowerment of Kirana stores including in the smaller towns.

“These highly energetic and self-motivated entrepreneurs have suffered in recent years because of their inability to invest in technology and infrastructure,” he said.

Related Article: Jio.in is not in use: Is Jio Digital Marketing team effective??

To carry out this initiative, the chairman’s company will deploy blockchain, IoT, AI and other technologies on a Pan-India basis. During this digital revolution, many will be linked up as the partners including producers, small merchants, consumer brands, consumers and traders.

The main moto for this initiative is to change the retail system to organized which was unorganized. It has the business opportunity if $700-billion.

Last year the company had crossed Rs 1.3 lakh crore in revenue. The Reliance Retail stores are about two-third which is in tier-II, III and tier-IV towns.

This steps will not only help to organize the but also it will help India to become modern. This makes the smallest neighborhood Kirana shops for the future-ready for a well-digitized store.

“I believe that the small must not only survive, but also thrive in New India,” Mukesh Ambani said. The new commerce is said to revolutionize India’s 3 crores Kirana stores.

This Reliance ‘New Commerce’ initiative digitally connecting Kirana stores will give opportunities to the Kirana shops, retailers to use more digital platforms and we can expect more domain names registrations and sales in coming months.